There are a few issues that I have with the idea that the Town of Selma will be providing free public wi-fi.  First, there is no reason why we have to hire a "consultant" to do this for the town when there are high-speed network providers that can do the job right here already.  Furthermore, one of these same providers already does networks like this, and I use their services regularly to connect to computers and networks hundreds of miles away.  I have my company computer on this very desk connected 24/7 to do the very thing that the town is spending almost $60k to do.  This can be done for far less money.  Next, I have a problem with providing wifi hotspots at public expense, especially "the public would be able to have free Wi-Fi service up to two blocks away from all 10 public buildings".  Some of these buildings are near residential housing and businesses. That means that I will be subsidizing tenants, homeowners, and business owners with free internet while my neighbors have to pay full price for theirs.  With internet providers abound and mobile data plans in plentiful supply at reasonable prices (even free if you know where to look), why are we taxpayers funding internet for private citizens and businesses?  It is one thing if private businesses wish to provide free wifi as a way to attract, keep, and placate customers.  Different data carriers even provide free hotspots around the country for their own customers.  But a town government should not be giving away that for which we who fund the town have to pay.
Posted by Troy LaPlante at 8:24 PM No comments:

We watched the inauguration today. I watch regardless of who it was that takes the oath. Donald Trump gave a decent speech today. Still, I would love to hear the shortest inauguration speech in history that would go something like this. 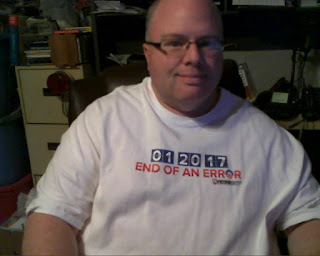 Posted by Troy LaPlante at 8:37 PM No comments:

Over the years, I have run across a good many political liberals as well as theological liberals.  Here in the USA, we have a set of founding documents and principles.  In Christendom, we likewise have a set of founding writings and principles as found in the Holy Bible.  I have found a lot of parallels in the mindset of both sets of liberals, and they often coincide.

What I find in the world's system of politics in our nation, state, and local governments is the tendency to have one's personal affections and behaviors, then look for a way to justify them within the law.  And if the law doesn't quite fit, you merely either explain it away, or twist it through interpretation until it fits your desired liberty.  For example, Alexander Hamilton and George Washington stretched the concept of implied powers to get a national bank even though it was not an enumerated power in the US Constitution and both men were there when the document was crafted.  In Marbury vs. Madison, the US Supreme Court found a liberty that did not exist for them in the form of the power to declare laws as unconstitutional.  The Supreme Court found the right to kill unborn children while still in their mother's wombs via an unwritten nor intended right to abortion.  The SCOTUS has also found the right to "freedom from religion" and the "separation of church and state" where none exists and the ripping of old writings far out of their obvious context and applying it to a court case.  The constitutionality of Obamacare, Social Security, welfare, and homosexual marriage (not to mention even the concept that government has any business in defining marriage) etc. has been fabricated to justify what used to be considered deviant, sinful, or abhorrent behavior.  I could point to many examples in holy writ or even today's news about examples in the Church.

Just yesterday, I ran across a Twitter Troll that attempted to use the logic that I must be wrong about the US Constitution if a judge or even panel of three disagree with my reading of the scope of a constitutional amendment.  He assumed that one cannot have any true knowledge of the document, founding truths, original intent, or grasp of the text and yet proceeded to inform me of how he has to be correct because of his "interpretation" if a few judges happened to agree and ergo anyone else must be wrong.

Now, this may be a simple approach on my part, but I believe that the text of a law or of the Constitution, much as in the Bible, pretty much means what it says when laying out principles, guidelines, and the like.  A knowledge of both written context and historical context are helpful in understanding the meaning or intent.  And yet if someone wearing a robe, whether judge or clergy happens to render an opinion, then it must be accurate.  If those opinions are inaccurate or built upon a falsehood, those who stand for the truth of the text and disagree are vilified as being ignorant, pseudo-experts, legalistic, pharisaical, or simpletons.  A common one nowadays is to use the label of ___phobic; just fill in the blank.  Effectively, this is an ad hominem attack in that if you disagree with the elevated expert, commentator, or potentate then you are obviously wrong and therefore the veracity of your argument or position is likewise in error.  I instead stick by the quote of John Adams, "Facts are stubborn things."

I find it hypocritical to assert that someone cannot be knowledgeable because they disagree with their chosen perspective or expert and that something must be interpreted in order to grasp it.  No, some things need no interpretation since they are self-evident and clearly written with a concise meaning.  To find liberties where there are none, dismiss prohibitions that clear, and excuse and accept as normal some abhorrent behavior is not enlightenment nor being saintly.  It is being loose with the truth.  Sadly that is the norm today.  But keep this one axiom in mind.  If you see it in our government and our society, it is because it was first allowed and accepted in the Church.  As the Church goes, so goes the nation.  I choose to stand against the prevailing winds of doctrine, whether in the world or in the Church.

A Board of Education Appointment and a Conflict of Interest

The below is a letter that I sent to the editor of "The Selma News" this morning.  I attempted to send it to "The Smithfield Herald" but that paper only accepts letters of 200 words or less.  I can hardly ask a question in 200 words or less.  So, I am also blogging it here.

On Tuesday, January 3rd, the Johnston County Board of Education appointed Mr. Todd Sutton to fill the Board’s vacancy created when Larry Strickland resigned his post to serve in our state legislature.  In total, nine people applied for consideration for the open position, myself included.  I say that to stress the following point.  I am not writing this letter because I was not the one selected to fill that position.  I was under no illusion that I would be the front-runner for that slot.  There were some fine applicants, Mr. Sutton included.  My philosophy was simply that one cannot be considered if one does not apply.  I do not personally know Mr. Sutton, and from everything I have read about the man written by mutual acquaintances, he seems to be an honorable individual.

Mr. Sutton has two children in the Johnston County school system, as do I.  I am glad to see that a parent is willing to get involved in the educational system that is instructing his children, which was the same motivation I had in proffering an application for consideration for the open position.
According to the Johnston County School System’s own web site, a news story was published the same day as Mr. Sutton’s appointment.  One of the things mentioned caught my attention.  “Sutton’s wife, Lynda, is a teacher with Johnston County Schools…”  That, my fellow citizens, is where I have a problem with the Board of Education’s selection.  Many corporations and government agencies have regulations against someone being in a position of oversight of one’s spouse or family member.  This should be no exception.  Although Mr. Sutton may very well be an excellent candidate otherwise, this one item should be a cause for disqualification for the position.  Furthermore, this was an appointment, not an election, so such a consideration is even more relevant.  My saying this is why I wrote the disclaimer at the front end of my letter.

As a taxpayer in Johnston County, a voter, and a father of two (soon to be three) children in the   This is my only gripe about the selection of Mr. Sutton for the open school board seat.  This is a potential conflict of personal interest.  If Mr. Sutton’s wife worked as an educator in a different school system, a private school, or even one of the local charter schools, I would have no problem with the appointment of Mr. Sutton to the Board of Education.  As a matter of fact, I voted for Mr. Sutton in November’s election because of the reputation he had.  However, as I wrote earlier, I don’t know Mr. Sutton personally, so I did not know that he was running for the Board of Education while his wife was and is employed by the same school system that he would potentially oversee.  Had I known that at the time, I would not have voted the way I did.
county’s schools, I have a problem with the spouse of an employee of the school system being in a position to influence working conditions, budgets, compensation, and policies that personally affect their household.

This is nothing personal.  I tend to be objective about such things and I would have the same perspective regardless of whomever it was that got the appointment should they have been in the same circumstance and whether or not I had submitted my own application for the position.  I do know that out of the eight other candidates that applied, there was probably an excellent candidate that should have instead been primarily considered by the Board of Education.  Instead, the board unanimously agreed to allow a potential conflict of interest, and for that I blame the Board of Education, not Mr. Sutton.
Posted by Troy LaPlante at 9:57 AM No comments: