My two newest additions to my pen collection are a new Pelikan M1000 and a Karas Kustoms Fountain K. I show them to you here.

Posted by Troy LaPlante at 4:13 PM No comments:

In today's pen mail video, I show the Sheaffer PFM III, which had been on my wish list for a long time. I also got an old 1940's or 1950's lever filler Waterman's fountain pen.

The Sheaffer pictures I harvested from the internet can be found at http://www.penhero.com/PenGallery/Sheaffer/SheafferPFM.htm Pen Hero is a great web site for history, pen profiles, and information, especially for Sheaffer pens.

Posted by Troy LaPlante at 10:16 AM No comments:

Posted by Troy LaPlante at 11:53 AM No comments: 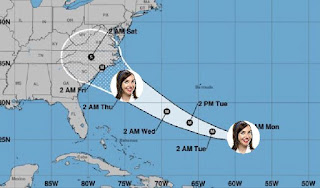 As I am sitting here at my desk, we are waiting for the landfall of Hurricane Florence. Like many others, I have prayed for God to lessen the storm, to steer it away from populated land, and push it back out to sea. Earlier forecasted tracks of the storm took the eye right over where I am sitting, making landfall as a category 4 storm. I have endured many hurricanes since moving to North Carolina over 30 years ago. I have seen the devastation that Hurricanes Fran and Floyd brought, especially. Another storm with a name starting with the letter F heading towards the North Carolina coast did not particularly enthuse me. I have been reading on social media about people thanking God for answered prayer with the hurricane’s path being diverted away from the original path that looked like we were “in the crosshairs” and is now heading in a more southerly direction, lessening the impact to our local area. Sure, we will still get heavy rain and winds. We will see flooding and loss of property. But at this moment, it appears that we may not get whacked as hard as originally thought. Personally, I am thankful for that. But I have an honest question for those who attribute the change in the storm’s path to answered prayer. Do you believe that God, in His love for you and your prayers of petition, care more for you than the other people that are now in the path of the storm? Are your prayers more special than the prayers of others? Does God love His saints in North Carolina more than those in South Carolina? Did God get more prayers from North Carolinians than He did from South Carolinians, so He decided to shift the storm track? What does that say about your discernment of The Body and mankind in general? Is your rejoicing at the price of others’ peril? Sure, “when the righteous prosper, the city rejoices” (Proverbs 11:10). The other half of that verse says that "when the wicked perish, there is shouting." Are those who are now going to be in the storm path all wicked? Of course not. He sends rain on the just and the unjust alike (Matthew 5:45). Yes, we can be glad that our level of danger has lessened some. But let us not attribute that to some act of God in response to your prayers which is still contrary to the prayers of others. Let us still pray for those in greater danger than ourselves, for their preservation and salvation, and not blame God one way or the other.
Posted by Troy LaPlante at 2:57 PM No comments:

In today's pen mail, I follow up with a viewer request on a writing sample on a Scripto 1950's lever filler fountain pen. I also share some new acquisitions of a Sheaffer Tuckaway, a Waterman's Crusader Taperite, and a circa 1970 - 1980's Waterman cartridge/converter pen.
Posted by Troy LaPlante at 4:51 PM No comments: